Danielle and Shejenthran are pictured above.

It was my first visit to the 50 seater venue The Hope Theatre and hopefully not my last. Like many Fringe Theatres, it has a friendly atmosphere, bar and food available. I can see why this one, in particular, has won awards.

All credit must go to Tom Powell for his new fast-paced, thought-provoking and hard-hitting play Little Echoes. The 90-minute performance takes place over a year in the life of Danielle played by Maisie Preston, a young girl groomed into the sex industry by what appears to be a new bright singing career. Running parallel to her story is Shejenthran who witnesses his brothers acid attack and his struggle to get the answers as to who did it.

As the plot develops we are left questioning how the authorities who are meant to protect us can fail. Alongside this we also see June taking the unusual role as the driver and PA for Henson, the lead in the sex industry section featured in the play. Leaving us to question as to who is really capable of doing what when it comes to obtaining a better life.

As Shajenthran played Mikhail DeVille becomes driven by an obsession to find the young lad responsible for attacking his brother with acid. He stumbles into a sinister world where things are definitely not what they seem. The two stories collide ending in tragedy.

June can be seen above standing over the frightened Danielle.

June played by Caira Pouncett appears at first to be running around in the role of personal assistant to Henson, who we only ever know through phone calls. The details of the jobs she attends lack detailed information at the beginning. As the plot develops we become exposed to the seedier details as she explains more about the jobs she is doing and her role in the industry. 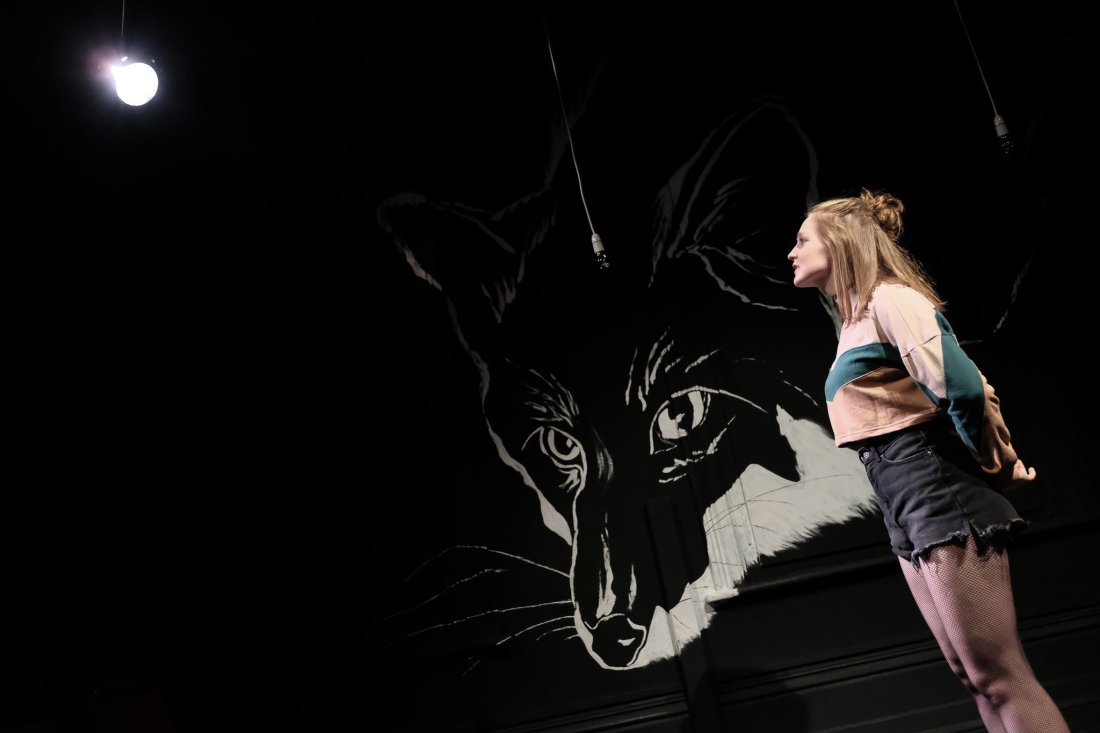 Danielle in conversation with Henson pictured above.

Drugs are prevalent throughout the play in the form of cocaine, used frequently by June onto her gums in order to numb the pain when she is asked to tackle more difficult tasks. Somehow blocking out the reality of the job she is doing in this seedy society she is involved with.

The trend at the moment in new plays and films is to challenge our concepts about sex trafficking and human traffickers all being run by male-only gangs. By casting the role as female it adds another dimension to these hideous crimes and teaches us that we are all human and gender does not make you immune from committing these offences.

Amazing performances by all three cast members as the nature of their roles must be demanding and exhausting.

Raising awareness of how exploitation begins through the guise of a conventional romance and switching the roles is extremely important. As we need to be aware that these crimes are still being committed and young girls like Danielle are still at risk. The donations collected at the end of this play for the charity beyond the streets who help and make a difference in the people’s lives who are being rescued from exploitation.

Photographs by Will Alder.

It is found on the corner of Upper Street and Islington Park Street.