The iconic four coloured chairs used in the “Feel” performances, pictured above.

This weekend the 9th and 10th March 2019 saw David Brady take over the theatre in his new role as Artistic Producer, at the Lion and Unicorn pub theatre in Kentish Town, London. It was launched with pay as you feel performances of the popular “Feel More” monologues performance play. There was a buzz on Sunday evening in the theatre and the play finished to enthusiastic applause. Which is hardly surprising as the seven actors were outstanding.

Feel more highlights the social issues surrounding the predominantly 90s generation. The screen time in public places is destroying human contact and the ability to form lasting relationships. Has the art of conversation and a simple human connection become lost to the history books?

Firstly we meet Brenda the UKIP supporter and campaigner who is blanked, swore at, ignored, mocked and treated like a social leper. While she is trying to hand out leaflets. This isn’t predominantly politically related, as her monologue explains that she has always struggled to fit in. By campaigning, she felt she would be doing something to make a difference. Instead, she isolates herself further from the world she desperately wants to be a part of.

Next is our serial dating app addict, Elise. Desperate to get away from meaningless one night stands, that leaves her feeling used and unfulfilled. She just wants to make that ultimate connection and get married. Her train crush that she has observed daily and has never spoken to, is the one she has her heart set on and their entire train themed wedding is planned in her head and described in great detail.

Ben Fensome playing Luke had a fan base in the audience that evening. As when he pushed back the duvet at the opening of his monologue a small cheer was heard from the left side of the audience. The delivery and compassion of his role as Luke is heart-wrenching. As he is struggling to find the one man he can connect with. His feelings of self-doubt, inadequacy and hangover symptoms can be recognised by everyone. However, could the drunken one night stand he has encountered the night before being his one? 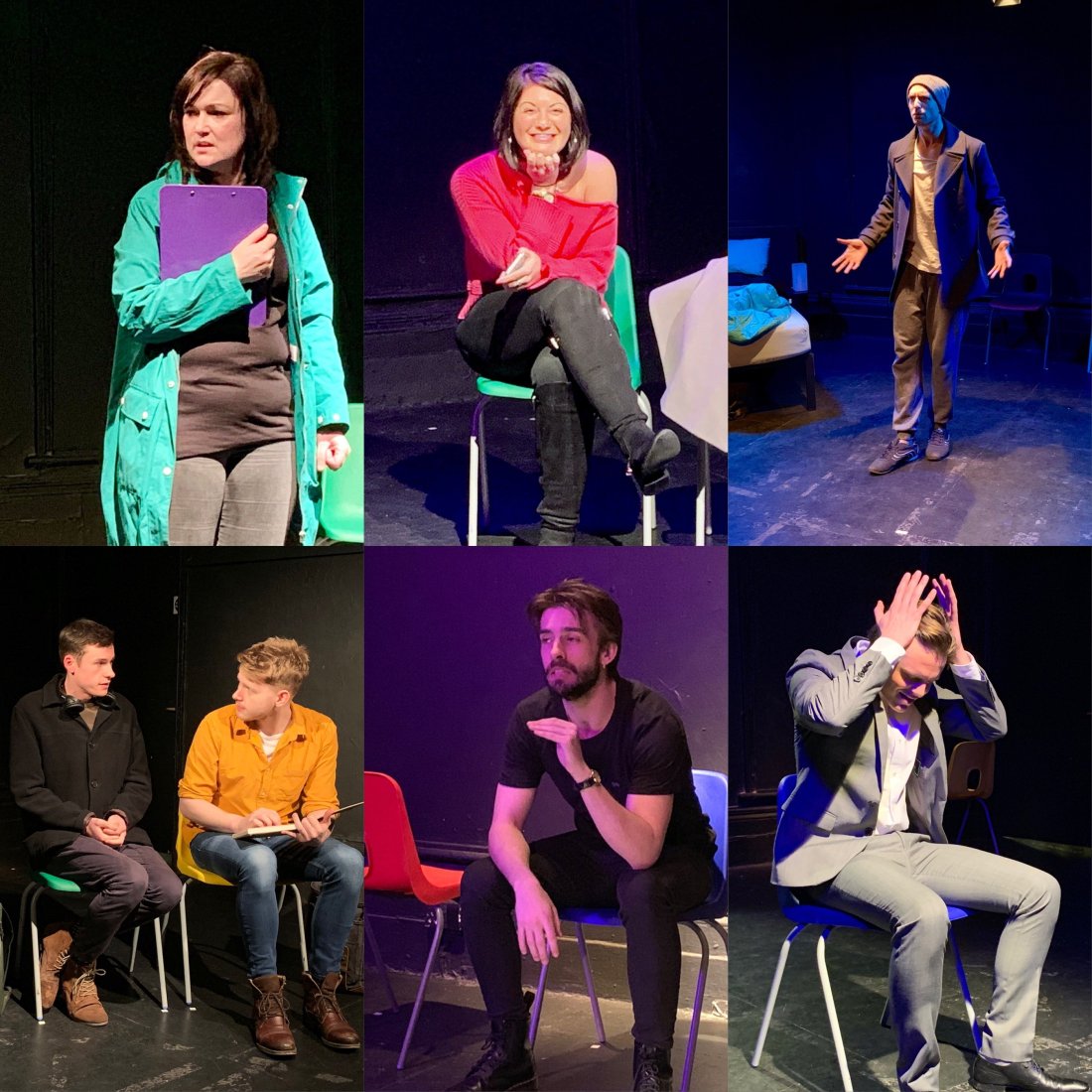 The full cast pictured above starting from the top left Brenda, Elise, Luke, Michael and Jacob, Matt and Mark.

The second half is opened by a dual monologue. Jacob and Michael take the same tube journey on a daily basis. They spend so much time watching and observing each other that past bad experiences stop either of them from making the first move. Jacob explains how he mistook a life model he liked for being gay and the awkwardness has left him questioning his ability to know who he can approach.

Matt performed by Ross Kernahan is harder to watch as the deeply traumatised insomniac, who takes to working nights in a bar for the company. We quickly understand he has a keen eye for people watching and summing up every situation around him in order to head off problems before they arise. In an attempt to save people from danger. Although never mentioned the likelihood of him suffering from PTSD would explain the symptoms. Unsurprising though as we learn that he witnessed the man next to him on the platform jumping in front of the tube. The despair and feelings of being helpless are delivered in a powerful performance.

Finally, we meet the outsider and London imposter Mark. After growing up by the sea as a fisherman’s son he never truly believes he belongs in the city job he has worked hard for. Believing the smell of salt has never left him and at any time he will be exposed as a fraud.

There are several themes running throughout these monologues. Our desire for human contact, many describing the touch of hands entwined, their first kisses and the desire to be part of a loving couple. The main scene is recognisable many people nowadays as a crowd stands fixed to screens waiting for the next delayed train.

One thing to be taken away from the feel performances is the bleak commentary on our social habits. I very much doubt anyone will leave the theatre and fail to start observing their outside surroundings in more detail. Or on the other hand, is the communication through our screens masking a deeply lonely society who are desperate to connect by any means they can?

The simply dressed stage used by the Feel More performances allows the audience to focus on the actor. The delivery and connection each one makes are your sole focus. To hold the stage as their own highlights the high standard of actors to be found in fringe theatres. A fantastic start to this launch weekend.

The Lion and Unicorn Pub Theatre