Richard Kalinoski’s play Beast on the Moon transports the audience to America during 1921. After the Armenian Genocide where so many innocent people lost their lives in one of the most horrific events. It is based on real events which add depth to this brilliant play. It all begins when Seta arrives in her new home at the tender age of 15 to be with her new husband Aram. They had been married without meeting through the picture bride practice used in the early C20th.

Fundamentally the audience is watching a child catapulted into an alien country where the expectation is that she is to be Aram’s wife. His expectations are that she automatically knows what the role means and how to behave, coupled with her just arriving in the new country of America. Quite rightly she is confused and scared. Zarima McDermott’s powerful performance leaves you under no doubt about how Seta could have reacted. This is reflected too in George Jovanovic’s role as Aram where he struggles to know how a husband behaves and frequently takes refuge in quoting from the Bible during moments of uncertainty.

Their relationship combines frustration, kindness, understanding, arguments and tolerance. However, the underlying trauma caused by the atrocities the couples have had forced upon them is always beneath the surface. Only once the grief has been confronted can a happier future be obtainable. The couple is pictured below during one of the tender moments shared by them. 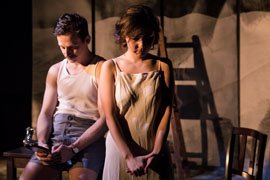 Gentleman Vincent narrates the audience through the biographically based history of this couple’s relationship. The older actor morphs into his 12-year-old self effortlessly, his body language and voice change and you no longer see a man in his 60s instead the scared, questioning, spirited young lad Seta has bought in from the street with whom she befriends. Whether this is to replace the child she cannot have or because she relates to being orphaned it is for you to decide.

Vincent in the guise of his 12-year-old self can be seen below during a heated argument with Aram.

The horrendous back story for each character is so descriptive and delivered with concise accuracy that the audience cannot fail to be moved. However, it has been written to empower each of them to become survivors instead of victims. Tremendous credit to the writing skills of Kalinoski, as with such powerful backstories the role of the victim could easily become the storyline. Towards the end, a couple of people in the audience were in tears.

The respect and empathy for the people who were killed and hurt during the Genocide have been treated with consideration by the playwright. This combined with the excellent direction by Jelena Budimar this play informs, invokes emotions and leaves a lasting impact on the audience of this harrowing period in history.

The intimate 50 seater theatre offered by the unique venue of the Finborough is the perfect setting for this play.

5 stars for this incredibly moving play.

At The Finborough Theatre