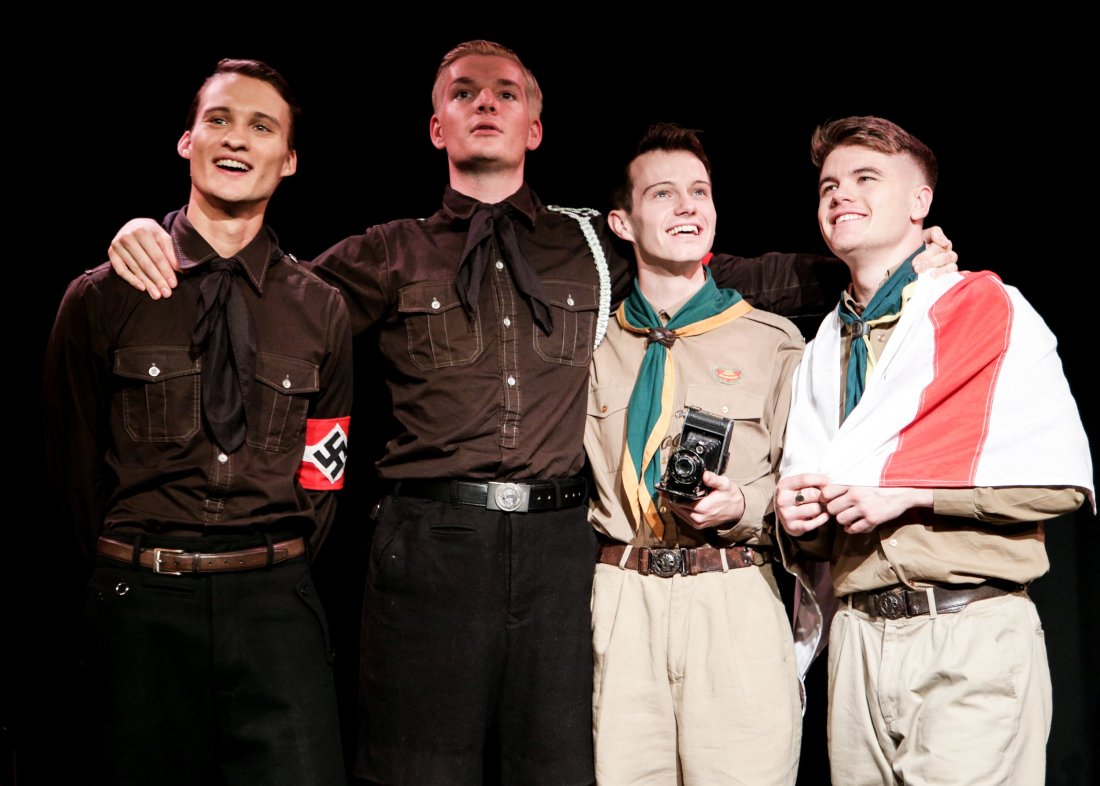 The Good Scout by Glenn Chandler tells the lesser-known story of a group of Hitler Youths who came to stay with a group of Scouts in the 1930s. It’s based around alleged events which took place between Lord Baden-Powell and newly appointed ambassador to London Joachim von Ribbentrop decided to do in an attempt to create better relationships between the two youth movements!

When the Hitler Youth came to England in the late 1930s what harm could come from letting them camp out with the Scouts and for both groups of boys to go on harmless bike rides around the countryside where it just so happens military bases were built. Armed with their cameras the Hitler Youth soaked up every bit of hospitality offered to them!

I was surprised to learn that Cornish had only recently joined the cast after the successful run at the Edinburgh Fringe this August as he and the cast are at completely at ease with each other and they were no signs of this not being the original cast members.

Clement Lohr’s frighteningly believable role as the lead nazi in the visiting Hitler Youth group, Gerhard Kleeman is an absolutely amazing Arian race choice for this part. The piercing eyes capture you and he commands his position of power on the stage throughout the play and often only by using facial expressions or killer looks at the other boys. His tall stature and blonde hair dominate over the other three boys Will, Jacob ( Charlie Mackay) and Friedrich Dorf (Simon Stache).

Gerhard stringently appears to abide by the rules on his terms. Although and no matter how close they are to him he will change his stances to suit himself. As he openly admits to having homosexual relationships the audience are fully aware that he would happily report someone for doing the same thing and sending them off to a camp.

I was horrified at one part during the dialogue when John Dory explains that in England you would get two years in prison for homosexual acts yet in Germany they would “cut your balls off” it certainly highlighted the barbaric punishments dealt out by German authorities at that time. No wonder fear was rife among the conscripted members in the Hitler Youth as we witness through the eyes of Freidrich Dorf who fears going back to Germany and he certainly never appears to be a willing soldier!

The charismatic John Dory played by Lewis Allcock will do anything he can to get the desired results using his good looks, flash suits and status to charm his way into the Parrish’s trust. Rose Parrish (Amanda Bailey) welcomes Dory into their home firmly believing at first that he only has their best interests at heart.

Writer and director Glenn Chandler has bought to stage a hidden part of pre-World War 2 histories by reading up on these alledged events that possibly took place between Lord Baden-Powell and Ribbontrop and has adapted the story into The Last Scout. A part of history that has been left unspoken about for many years and an extremely interesting twist in history that deserve to be heard.Four stars.

Written and Directed by Glenn Chandler.